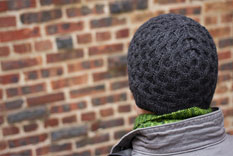 put a bird on it!

When we found out that one of our own was pregnant, the members of KBC started discussions of what kind of group gift to give. A quilt, sure, but not everyone sews. So we brainstormed an additional knit idea, and we eventually decided a mobile of knit birds would be cute and kind of funny—the parents, recently relocated to the East Coast after years in Portland, would be no strangers to the concept of putting a bird on it.

Finding a bird pattern led to much snickering when we settled on a free Blue Tit bird pattern from Lion Brand. Be warned: It is a finicky knit, and there was much swearing by all involved. The pattern is clear, it’s just a pain to knit. My bad; I am the one who found the pattern and decided it was the one! Ultimately one of us decided to knit the branches instead of wrestling the yarn into a bird (fine by me–finding random branches and ensuring they were bug-free was kind of stressing me out). Another took on the task of quilting and binding the group quilt (more on that separately), so in the end we had 7 unique birds!

Here’s my bird—knit using a random assortment of Cascade 220 from my stash. When I perched it on the branch I made it more “squished” than its natural state, so it got a little chubby. And maybe cuter than it originally was!

I set to perching them either in flight or on the branches so that they made a balanced mobile and oh boy was that a challenge. I used to make mobiles a lot in high school, so I thought it would be sooo easy. But hello, that was 20+ years ago, my skills were rusty, and most of those mobiles involved PAPER ORIGAMI. Not heavy, various-weighted knit birds! I did learn a fishing lure knot tying technique that I think is pretty sturdy and is good to use with filament thread (though I never really succeeded in making it look as taut and neat as in the video), and I feel really good about the finished mobile. I so badly wanted some birds to sit atop branches, but they were so heavy they’d flip right over; thinking to string the vertical supports through the birds was an inspired bit of genius, I thought!

We finally gave the mobile to the family at Maryland Sheep & Wool yesterday. And cutiepie Hazel, knowing it was her flock of birds, set to claiming it immediately—nomming on one right away! 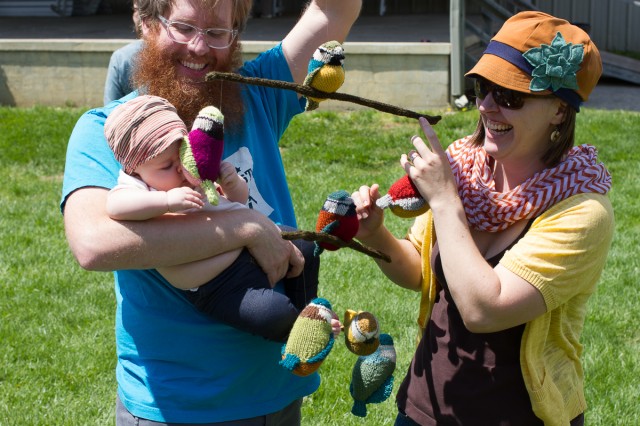 4 Responses to put a bird on it!