If you’re like me, you often look at basic sweaters in stores and mutter to yourself, “I could just make that.” How often do you see a simple pattern from a knitwear designer and think, “but that’s just a basic sweater, I could just make it up myself.” But how often do you? Well, if you’re still like me, and you’re being honest? You never do. If you embark on a design idea, you get more ambitious and end up paralyzed with indecision. That’s when you should, like me, rely on the fantastic patterns already out there. Veera’s Buckwheat fit the bill perfectly.

Because, let’s be honest, it’s a simple little sweater. Knit from the bottom up in the round, then joined at the shoulders so that the sleeves can be picked up and worked down, it requires practically no finishing and gives you a clean-lined, simple sweater that goes with anything. I wore it with dress pants to give a talk at TNNA, and I wore it with jeans when hanging out with friends that night. At breakfast that morning, I mentioned having just sewn on the buttons and my coworker, both Vogue Knitting’s executive editor and Knit Simple’s Editor in Chief, laughed and said she had assumed it was store-bought. Aw shucks! 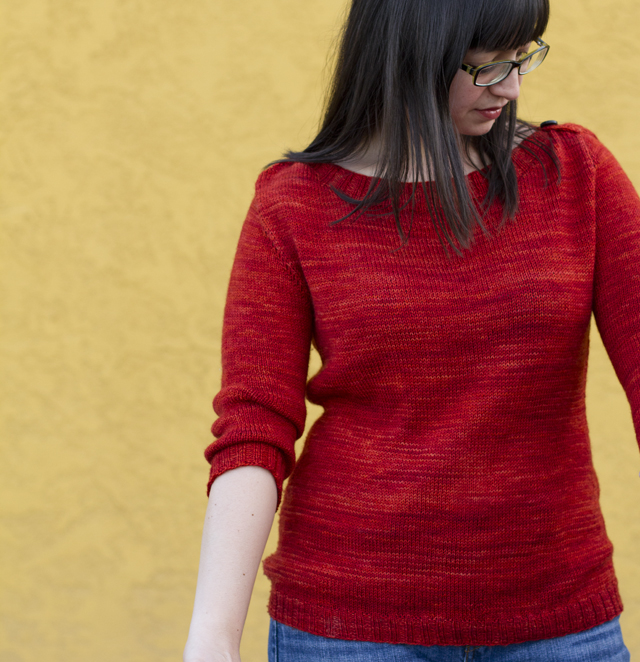 The yarn is Sanguine Gryphon‘s Skinny Bugga, bought at this past Rhinebeck with no knowledge that the company was going to shutter within weeks (and split into two new dye studios). Sanguine Gryphon was legendary at fiber festivals; people would line up and wait more than an hour to be rung up! I happened into the booth during a rare quiet moment when there were, honest, about 3 people browsing. I needed 3 skeins, so I was definitely limited by colorways that had multiples, but even if I’d gotten there first thing, I think I still would have chosen this color. (“Sea Star”)

It blocked out a bit loose and floppy, which means it’s just a touch too big, but no matter. I like the way it drapes. Sadly in just one day of wearing it, and carrying a purse (as one does), it’s starting to pill and look a little ragged on the side. That’s super disappointing, but hopefully will just require a little upkeep between wearing. The buttons? A mismatched pair of about-the-same-size black ones I found in my button collection. Likely they are both spare buttons from other garments I own. Who knows. I hate buttons. I hate selecting them, sewing them on, etc. So these are just fine by me! The awesome FO shots? Courtesy my friend Caro of Splityarn, the photographer-to-the-knitting-stars (and me!). We met in a parking lot in Phoenix, along with Pam of FlintKnits, who was getting her own personal photo shoot, too, for a to-be-released pattern (Isn’t that sweater awesome? Love the color and all those cables). Stitchy, of course, was there to smooth the wrinkles and tame flyaway hair. Caro and Stitchy are a photography duo par excellence. (And for hire!) Afterward we had dinner of cheesy Mexican fare and had drinks in a revolving bar. Revolving bar!